A Short History of HERE LIES

Kieran Crowder has been making art since his early childhood in the north of England. His has become a life dedicated to a very particular (we may even say very pure) vision. In the form of Here Lies it offers those who encounter his work an experience of a unique and enduring kind.

Here Lies gathers together paintings and other visual and text-based material in a multi-faceted work, at once radical in conception and far-reaching in scope. Indeed Kieran has spoken of it as a philosophy given physical form: really, as one of his early critics put it, thinking in paint.

Part of this thinking originates in Kieran’s historic opportunity to use in his art a quantity of furnace waste, including human remains, acquired early on in his career. However the ground of Here Lies was prepared long before. Its original expression was a youngster’s fascination with all things natural - especially if portable enough to be shared with others.

A one-time collector of weird rocks, owl pellets and impressive conkers, amongst other things, Kieran’s sense of the magic in nature has never left him. However, the circumstances of his life took this fascination with the material significance of natural phenomena and directed it in a very particular way.

For adjacent to the municipal Gardens where he was raised, the local crematorium occupied part of the same estate, all managed by his council boss father - and it was here in 1976, at the age of fifteen, that Kieran was invited to witness his first cremation.

He recalls a highly educational afternoon. It included learning about the rather obvious leftovers piling up in temporary storage at the rear of the facility: a mix of nails, screws, firebrick, medical scrap and charcoal, amongst other things. This was saved until the weekend, then quietly disposed of. Kieran liberated an artificial hip joint as a souvenir of his visit, promising to be careful who he showed it to. 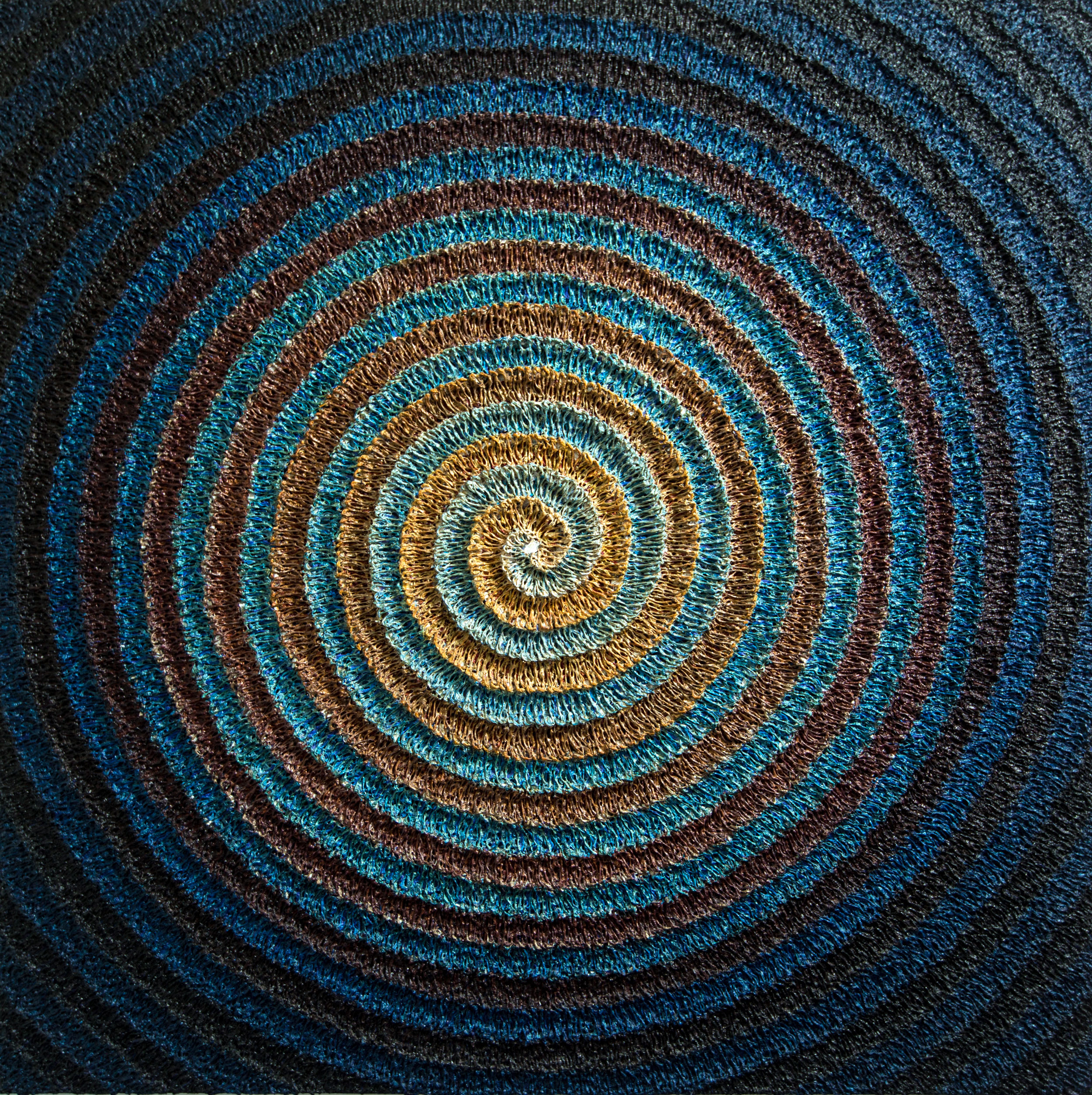 A year later, Kieran was bemused to find himself working a summer job back at the same facility. He'd been picking up litter in the Gardens when a call went out for a temporary attendant, available immediately. Principally on the grounds that he’d seen it all before - and there being no-one else willing to do the job - he began a twelve week stint before college in the autumn.

One of the many new things Kieran now had to do was the Saturday morning clean-out of the enormous crematorium furnaces. He recalls his surprise at the volume of material this task produced, especially if done well: a small wheelbarrow full of mixed bone fragments, chunks of firebrick and endless dust - all of which accumulated in the multiple side-flues of the furnaces, and threatened to clog them up permanently if not regularly removed.

To this large volume of waste was added the ferrous metal and other material sifted from the ashes during the week, before the whole was quietly disposed of “in accordance with the instructions of the local cremation authority”. This meant tipping the lot down the bank of an enclosed woodland pool to the rear of the crematorium building, and covering up the resultant scree with a few shovelfuls of soil, for propriety’s sake. Even if someone was walking through the wholly private woodland, they’d see nothing but the earthwork peninsula, two meters deep, extending out from the side of the pond.

From the outset, Kieran noted the manifest difference of treatment between ‘official’ remains or ashes - normally presented to bereaved families or interred in the crematorium garden - and the disavowed material consigned to the pool. The former were always carefully identified and reverently handled, the latter not at all. It was out of a feeling that something more could (and perhaps therefore should) be made of these abject remainders that Here Lies really grows. And so Kieran began to intercept them for his emergent art purposes, storing them elsewhere while he worked through the form that these might take.

'Permission' of a sort was finally requested in a conversation between Kieran and his council boss father, early in the summer of 1984. By then much of Kieran’s initial thinking had been done, and it was less a request than it was a statement of intent. His father’s response was in turn less ‘granting’ anything than it was offering up some oblique guidance, which he expressed as the following conditions: “Don’t bring cremation into disrepute. Don’t bring me or my crematorium into dispute. And preferably - though I won’t insist on it - wait until I’m dead!”

This was not interpreted by Kieran as an official green light of any kind, but as (a maybe reluctant) acknowledgment, with proper caveats: also a signal from his father that he'd not get in the way. In any case fully conscious of the scale of the task he had set himself, Kieran was already imagining Here Lies as a kind of lifework, in every sense: his father’s ‘conditions’ meshed simply with his developing thinking about quite what such a work might involve.

Kieran’s interception efforts continued over the three school/college summers ’77 to ’79, and culminated in the final year he worked at the crematorium, 1984. (Other visits over the years must also be counted here, as he had access to the building for the seven or so years in question.) Eventually they would total nearly half a cubic metre of ashes, along with a smaller quantity of ferrous material - much of which has come to feature in the artworks Kieran continues to create under the banner of Here Lies.

For as the philosopher - in this case GWF Hegel - said: the spirit is a bone. 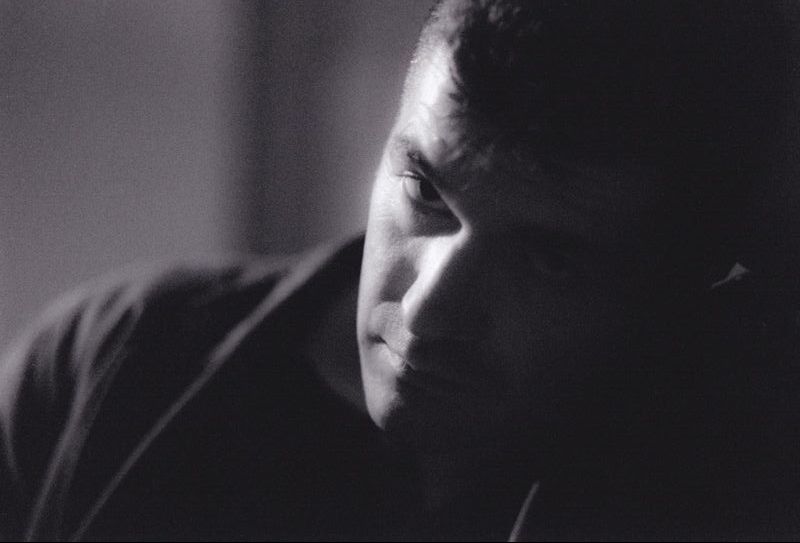 I was born in 1960 in Warrington, Lancashire (now Cheshire), the eldest of three sons of George and Eileen. I have painted for as long as I can remember. 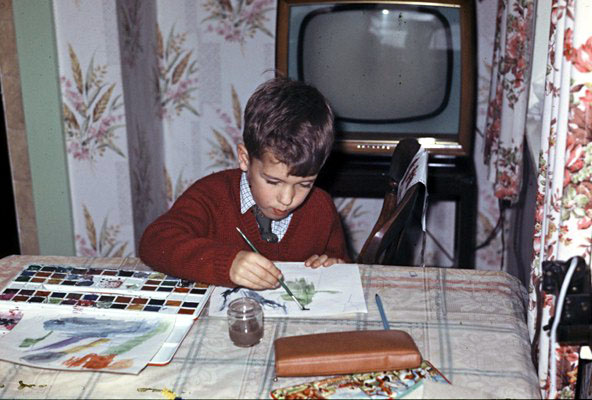 Turning pro, my early mentor was Nick Samsworth, who attended my first exhibition and with whom I worked alongside for years (85-88). Head of Art at Hereford College, Nick had done his painting MA at Chelsea and been exhibited with Bridget Riley among others. A very fine artist, and thoughtful teacher, he is producing original work to this day.

My other early mentor was the late Miles Peter Richmond, pupil of the great David Bomberg and co-founder of The Borough Group in 1946. While Nick Samsworth helped my thinking about paint and its potential, Miles was on another, historical level. Not only was he a direct conduit to Bomberg - one of the most interesting figures in British art - he, Miles, at age 70 had a lifetime of his own insight to convey. Breaking down Bomberg’s thinking about the spirit in the mass with his most devoted disciple - and subsequently refashioning elements of it for myself - are critical affinities.

Remoter ones - we might say ‘general artistic influences’ - are too many to enumerate, and would in any case be much the same as other artists, eg. contemporary art; the 20th century avant-gardes; and the longer history of Western and World painting and sculpture. However, related in various ways to my own interests are figures like Kosuth, Reinhardt, Cranach, Charlesworth, Fontana, Newman, Ernst, Serra, Blake, Weiner, Moreau, Klein, Dadd, Shiraga, Holzer, Still, Latham, Martin, Arakawa, Kruger, Motherwell, Ruscha et al.

Although by no means everyone, and self-evidently in no particular order, the longer my list of iconic ‘figures’ grows, the more I suspect it is really referencing critical individual artworks and the meaning(s) they express. For in my case conceptual influences are as important as artistic ones, with further ideas drawn not only from from art criticism & aesthetics but also more widely from history, literature and science.

Thanks to York University, I’ve a strong grounding in classical, empiricist and analytic philosophy, and contemporary European thought. My honours thesis was on the art/truth dyad in Adorno’s Aesthetic Theory. Post-graduate work at the Royal College of Art, initially along the axis Batille/Lacan, led me to Girard & Gans, Dumouchel & Dupuy et al and the ground work for one strand the ‘new thinking’ embodied in Here Lies.